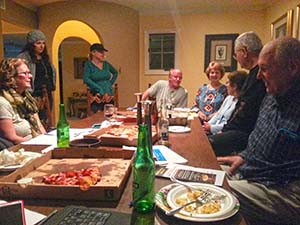 Last Sunday, the elected Khayan board members and a few others of met for the annual club board meeting at the home of president Dave Adams where the framework for the coming year’s functions and activities were discussed.  Among the hottest topics were the proposed bylaw revisions to officially include 2002-2005 ownership qualifying for full membership, which unofficially has been the practice for years anyway.  A  few other changes were proposed as well including elimination of the required car inspection before granting entry in the club, changes in what is included in the new membership packet given to new members and proposing the election for club officers next year be more formalized with written ballots.  The topic of different venues for both our annual anniversary party and Christmas party were discussed as they will both be different this year.  More detail will be discussed at our upcoming breakfast meeting on _____.   The club’s 60th anniversary celebration was also brought up.  Those that were here for the 50th celebration remember it was an all out event held at the Blackhawk Auto Museum with representatives from Ford attending and giving the club two beautiful original Thunderbird paints.

A copy of the revised bylaws are ratified, they will be available to all members either by email or printed copy if desired. Don’t hesitate to call any of our board members with any questions or comments.